This plaque was unveiled at 11am on 13 April 1999, to mark the opening on the same day and time in 1851 of United Evangelical Church on the exact site (William Street near Stephens Lane), the former Land Administration Building, then occupied by the Conrad Hotel. The ceremony was attended by representatives of the three churches, Baptist, Congregational and Presbyterian, Brisbane City Council, and the hotel, which funded the plaque. It was dedicated by the President of the Baptist Union, Mr W Gynther. There were other events held to commemorate the arrival of the Lang ships including a thanksgiving dinner and service on May 1 arranged by the joint-churches committee, a reunion of families of descendants at Mt Gravatt Showground and the unveiling of a plaque at Captain Burke Park, Kangaroo Point. Baptist Heritage Qld published two books telling the story of the Lang ships and the United Evangelical Church,  Fortitude: Dr Lang’s Vision for Queensland and the United Evangelical Church, and Strange Bedfellows: Rev. Charles Stewart Brisbane’s First Baptist Minister and the United Evangelical Church. 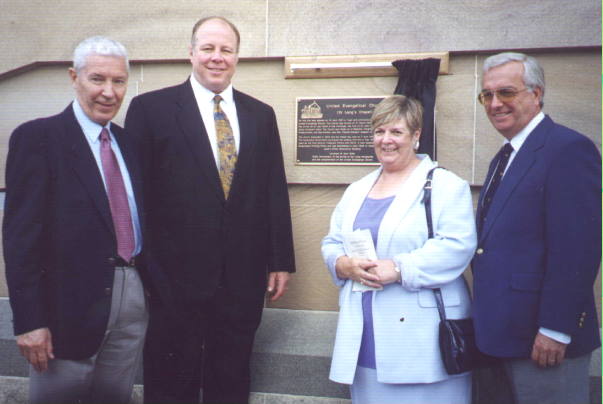